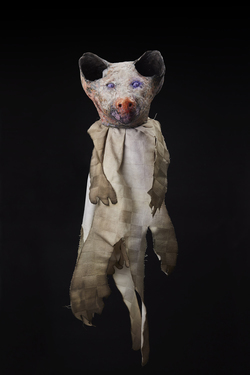 Preliminary opening at Cavin-Morris Gallery on Saturday, January 22 from 4pm to 6pm.  *The gallery will host a second reception on the Friday of the Outsider Art Fair on Friday, March 4, from 6pm to 8pm with Ricco-Maresca Gallery at 529 W. 20th Street. 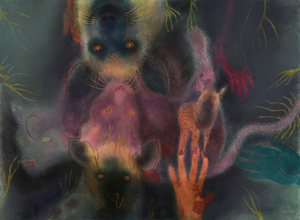 Jan Harrison’s Dream Animals
"To respond to an animal in Harrison’s imagined world is to grasp how closely its existence is linked with that of all the others."
-Carter Ratcliff

Click on Heading at the top to see link of full review.

"Harrison’s three-dimensional animals float in imperturbable repose and those in her paintings mostly regard us with utter calm. A few, with teeth bared, may well be poised for ferocious leaps. Still, her world is not an arena of Darwinian conflict. It is an ecosystem of intuitable meanings, of empathies intertwined. The paintings belong to a series the artist launched in 1993, which she calls Animals in the Anthropocene — animals in the time of human dominion, a title that could be understood as an indictment, given all that the human race has done to harm animals through environmental and other kinds of disruption.

However, the mood of Harrison’s art is not prosecutorial. Rather than send us messages about the damage we have inflicted on our world and its inhabitants, including ourselves, she confronts us with images and effigies of creatures whose beings are as complex as our own, and thus as valuable. She does this in the faith that, in coming alive to all that is vital in these figures, we will realize that the vitality of an individual creature is not enclosed within itself."

"An empathetic connection to a single being withers unless we weave it into a network of further connections with myriad beings. To respond to an animal in Harrison’s imagined world is to grasp how closely its existence is linked with that of all the others. Thus, she refreshes our insight into the interdependence of living things — and our understanding of life’s dependence on the real world, which, in the Anthropocene period, needs every insightful action we can take." 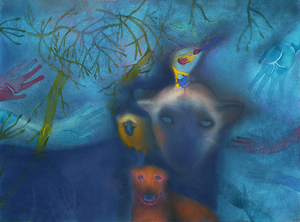 ANIMULA - big little soul, solo exhibition of the work of Jan Harrison, at 11 Jane St. Art Center, Saugerties, NY. It included pastel and ink paintings from her Animals in the Anthropocene series, and a sculptural installation of over 200 tiny porcelain sculptures, Tiny Porcelain Sea Creatures and Other Creatures. There was also a performance of Jan Harrison speaking and singing in Animal Tongues. The sculptural installation and performance was accompanied by the sounds of sea creatures and other animals by Gary Weisberg. Installed by Alan Baer. 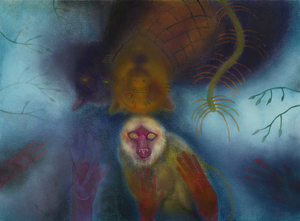 Interview/Article by Lynn Woods in the Kingston Times HudsonValley1

Article by Lynn Woods, about Jan Harrison's art, in the context of receiving the NYFA Inaugural Recharge Foundation Fellowship for New Surrealist Art.

Excerpts: "The pastel-and-ink paintings and porcelain-and-clay sculptures of Kingston-based artist Jan Harrison defy stylistic pigeonholes, but their otherworldliness and dreamlike logic relate to Surrealism, the 1920s Paris-based movement that celebrated the unconscious as the root of the creative impulse and exulted in the element of surprise.

Unlike the classic European-based style, which is characterized by jarring disjunctions and infused with a sense of alienation, Harrison’s work posits a world view in which animal and human natures are fused; the mystery that pervades her luminous, spectral primates, cats, birds and other creatures from her Animals in the Anthropocene and Corridor series stems from their sense of deep knowing and immersion in a primeval cosmos in which the wholeness of nature is restored.

This nature is not hostile, but rather a realm to be discovered, an intrinsic, if buried, part of the human psyche; the viewer identifies vulnerability, innocence, and grace in Harrison’s animals. ..... In its subtle patterning and brilliant, atmospheric color, her formal language bears affinities with non-Western traditions. The delicacy of line in her paintings and tiny scale of her recent sculptures heightens the sense of tender connection and tactile warmth." 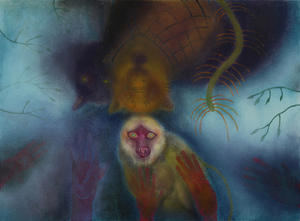 The New York Foundation for the Arts (NYFA) has announced Jan Harrison as the first-ever recipient of its Recharge Foundation Fellowship for New Surrealist Art. The award is supported by funding granted to NYFA by the Gu Family of The Recharge Foundation, a private non-profit organization that aims to promote cross-cultural preservation and create dialogues around visual and jewelry art. Harrison, who lives in Kingston, NY, is a painter and sculptor whose work involves empathy with the animal nature and animal/human interface as it relates to the collective psyche. Since 1979, her art has been connected with the philosophy of deep ecology and is focused on the vulnerability of endangered species.

“We’re thrilled to recognize Jan Harrison with the inaugural Recharge Foundation Fellowship, and are thankful to the Gu Family for their support of individual artists,” said Michael L. Royce, Executive Director, NYFA. “Harrison’s work, while rooted in Surrealist tradition, speaks very much to the present as we navigate complex relationships with nature and our own human struggles to survive. We hope that this award acknowledges her outstanding work and furthers her explorations in the New Surrealist style.” 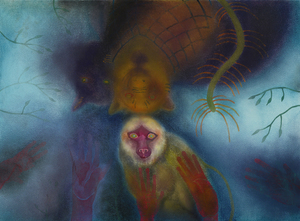 Feature article by Brainard Carey for Praxis Center for Aesthetics, Yale. The article is about extinction known as the Holocene extinction, and Jan Harrison's Series of pastel and ink paintings, Animals in the Anthropocene.

"The current political climate in the United States, in particular, does more than turn a blind eye to those who value capital over measures ensuring the welfare and survival of the planet that sustains all forms of life as we know it. " 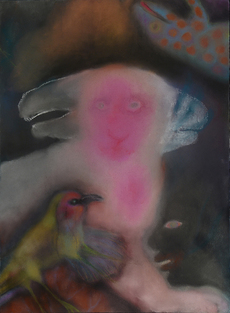 Interview by Brainard Carey for the Museum of Non-Visible Art, Yale Interviews, Praxis Interview Magazine....The recording of the interview can be heard on this link, which includes a discussion of Jan Harrison's visual art as well as speaking and singing in Animal Tongues.

Jan Harrison is an American painter and sculptor whose work, which primarily features animal imagery, centers on the animal nature as it relates to human existence and the collective psyche. Since 1979 her art has been connected with the philosophy of deep ecology. She speaks and sings in Animal Tongues, which she performs in conjunction with her visual art.

The Animal Nature and the Psyche - The Art of Jan Harrison 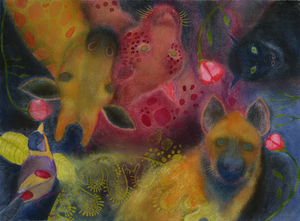 As part of our blog series dedicated to lost and endangered species in the lead-up to Remembrance Day for Lost Species, ONCA delves into the otherworldy work of New York-based artist Jan Harrison. The words are Jan’s own as she describes the work. Dive in, and drift a while through the more-than-human psyche…

ONCA’s mission is to cultivate environmental and social wellbeing through the arts. We aim in all our activity to inspire creativity and positive action in the face of environmental change, and to help galvanise the creation of a critical mass of work that responds to and explores these changes.

THE ANIMALS LOOK BACK AT US 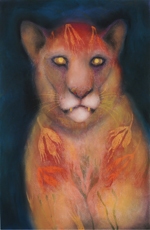 Anima/Animus; the strange and beautiful world of Jan Harrison

Jan Harrison performed in Animal Tongues with animal sculpture heads, in front of her large pastel painting, "Big Cat - Mountain Lion with Foliage Fur," at the Samuel Dorsky Museum of Art, on September 15, 2012.

"In June KMOCA presents three artists with fascinations for creatures other than humans. Each artist in their own way explores how by blurring the dividing line with the "other than human," we might become something other than human ourselves." (excerpt: Press Release)

"[T]he ahuman…divinanimality…the excluded, foreclosed, disavowed, tamed, and sacrificed foundation of…the human order, law and justice."
—Jacques Derrida, The Animal That Therefore I Am
Jan Harrison's painting "Blue Cat #3" will be on the cover of the book, DIVINANIMALITY, Fordham Press, to be published in the fall, 2014.

PAJ: A JOURNAL OF PERFORMANCE AND ART - Article and Podcast Interview with Linda Weintraub.

Jan Harrison's work explores the connections between human and animal psyches and takes the form of painting, pastel, sculpture, and performance. Jan's essay in the January 2011 issue of PAJ: A JOURNAL OF PERFORMANCE AND ART , called "Singing in Animal Tongues: An Inner Journey", describes the origins and scope of Jan's work, including her ability to speak and sing in "Animal Tongues." In this podcast, Jan and Linda discuss Jan Harrison's art and the animal beings who help create it.